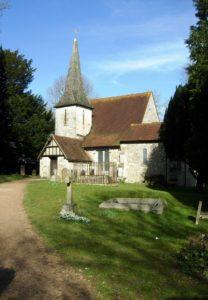 A Brief History of the Church

The church was built in the late 10th or early 11th centuries when Chaldon land was owned by the Benedictine Abbey of St Peter, Chertsey, (675 AD). The church, built of flint and local Merstham stone, is believed to have been preceded by a wooden Saxon building on the land of a Saxon manor recorded in the Charter of Fritheswald between 674 and 693 AD. A possible reason for such an early church on this remote site may have been the nearby course of an important pilgrim route to Canterbury along the North Downs.

The church has remained virtually unchanged over more than nine centuries. The international fame of the building is centred on the great Tempera painting which covers the west wall of the church and which is reliably dated at around 1170 AD. The picture represents the journey of the soul after death and the difficult climb to heaven up the Ladder of Salvation, only achieved after a virtuous life. The whole picture is based on well recorded stories in medieval literature and is the largest and most complete example of this type of medieval art. It attracts many visitors, including scholars from many parts of the world and is one of the greatest works owned by the Church of England.

There are many other important items in the church, which include a rare 13th century font carved from a large block of Merstham stone, a 17th century pulpit made during the time of Oliver Cromwell and a unique early Renaissance Tablet, (1562 AD) associated with a parish charity donated by the family.

Reference: An account of the history and structure of the church is included in “England’s thousand Best Churches” by Simon Jenkins (1999).

The Friends of Chaldon Church works closely with the Chaldon History Group.

This website uses cookies to improve your experience while you navigate through the website. Out of these cookies, the cookies that are categorized as necessary are stored on your browser as they are essential for the working of basic functionalities of the website. We also use third-party cookies that help us analyze and understand how you use this website. These cookies will be stored in your browser only with your consent. You also have the option to opt-out of these cookies. But opting out of some of these cookies may have an effect on your browsing experience.
Necessary Always Enabled
Necessary cookies are absolutely essential for the website to function properly. This category only includes cookies that ensures basic functionalities and security features of the website. These cookies do not store any personal information.
Non-necessary
Any cookies that may not be particularly necessary for the website to function and is used specifically to collect user personal data via analytics, ads, other embedded contents are termed as non-necessary cookies. It is mandatory to procure user consent prior to running these cookies on your website.
SAVE & ACCEPT